It was interesting to see that the majority of businesses in Crete, both in the main city of Heraklion and the outlaying communities, are all being operated by families. Aside for the occasional super market, the stores,restaurants and hotels appeared to be owned by individuals with their extended family members providing the extra hands to keep the doors open.  Other people may also be working there but often there was a “family friend” connection. And if you asked, you learned about the wonderful Greek family culture.

Compared to the USA Business Model

That’s a real difference from how business is done here in the USA.  The small business owner just can’t compete on any significant scale with the box stores and the chain restaurants here in the United States.  Just look around you.  Every mall in every community seems to have basically the same stores often built right next door to each other.  A Best Buy is next door to PetCo which is next door to Barnes & Noble.  It doesn’t change much whether you are traveling in Seattle, passing through Phoenix or stopping in Washington D.C.

And restaurant chains are the same way . . . you can find an Olive Garden, Claim Jumper, TGIF anywhere.  Starbucks and McDonald’s have become incredibility successful offering the same products with the same brand of service anyplace you go.  Same with hotels who offer creative rewards programs to encourage you to stay in their same hotels (even the floor plan is the same) no matter which city you are traveling too.

But do we really feel loyal to those big box stores, restaurants and hotel chains?  Only to the extent that we always know what to expect – what we’re buying – no surprises.  It’s a given.  That’s very different in Greece. When a business is owned by an individual there is a very different feel as soon as you, as the customer, walk in the door.  It looks different, it’s unique and the people helping you seem to be more interested.

What makes the difference?  When we as customers get the chance to meet the business owner and chat to them a bit about their business there is real observable shift in energy.  Now you’re helping an individual, a family, a business stay afloat by doing business with them.  You know where your money is going – not just off to corporate headquarters.

The result?  People do business with people they know and like.  The Greeks patronize their favorite cafe houses, taverna and shopping spots stores because they know who owns them and they want to support those businesses.  And if you are invited for a coffee and conversation in the back of the store that’s even better.  That’s where I’ll spend my money each and every time.

Shredding the BackPacks in Greece

We started off with six backpacks!  Being super organizers, my twin sister, Diane and I had carefully planned out how to travel to Greece for a three week work assignment carrying various sized backpacks (including backpack purses).  We were ready for any contingency, any emergency and any task.

But we didn’t need them and we didn’t miss them.  We hadn’t even left home before we decided to leave the first two fancy North Face backpacks behind on the kitchen table.  And then the two backpack purses (special “expensive” anti-theft bags) were swiftly stowed in the duffel bags as soon as we got to Greece.  And we really didn’t need or want to carry two of the light weight Eddie Bauer backpacks because everything could easily fit in one.  So we just carried one between the two of us.  It was wonderfully simple.

And I had to laugh . . . on the last night in Athens we shred even that last backpack.  Cargo pants with pockets and a passport holder around the neck was everything we needed.  Of course, we had spent all our euros helping the Greek economy so the money envelope was pretty light!

I’m back!  It was a fabulous 3 week adventure in Greece working for Global Volunteers on the island of Crete.  My twin sister, Diane, and three other wonderful women from Canada, Kathleen Close; Sandra Close and Sheila Davis made up our volunteer team under the wise leadership of Sam Pinakoulaki, our country host.  We called ourselves “Sam’s Chippy Chicks” and what fun we had!  The wine was flowing; the food was terrific; the sun was hot; the  buses were crowded and the laughs were endless.

Greek Hospitality is the Best! 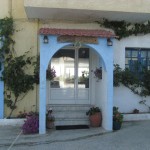 One of the best parts of the trip was living in the family hotel, Hotel Hankadas, and becoming part of the Greek extended family that gathers there every morning, afternoon and evening to talk, watch the political news, eat, work in the vineyards around the hotel and share a glass of wine with us at the end of the night.

We loved Paul who runs the hotel with his two sisters, Irene & Suzanne and his wife, Catherine.  There are also lots of other community people in and out including several traveling salesmen who sell linens out of their trucks up in the villages.

Our Work in Greece – Opening Doors for Future Volunteers

We were the 87th Global Volunteer team (and the first for 2012) to work in this small community, Amoudara, just outside of Heraklion in Crete. Our work assignment changed upon our arrival – from working each day in a local school teaching English to more community outreach and liaison work.  As one door closed another opened!

We were honored to be invited to work in a battered women’s safe house planting a garden and cleaning the house for the residents.  There are only two battered women’s shelters in the entire country!  In addition, we represented Global Volunteers at their monthly Board Meeting meeting networking with many of Heraklion’s most influential women activists – from age 80 to 20.  Our hope is that future teams will be allowed to work with the shelter especially in supporting the organization’s future children’s orphanage “House of Angels”.

We also learned that “volunteerism” is a very new concept in Greece.  We had a chance to meet with a newly formed group of women volunteers through a special invitation by the Vice-Mayor of Gazi.  In the local government chambers we participated in a joint meeting sharing our visions and commitment to volunteerism in all communities.  It didn’t matter that we spoke different languages – smiles & laughs communicated all that we need.

Over the next few days, we were invited to participate in a larger women’s meeting at the local Chamber of Commerce and then to visit a local kindergarten for young children of working parents.  The weeks ended with a phenomenal trip up to the mountains to visit Saint Spiro’s center for mentally delayed adults (more on that later!).

I have many funny stories and wonderful lessons learned.  I’ll share many of those over the next few weeks.  And if you see me packing my backpack again you know where I’m going . . . to Hotel Hankadas!

The Big Enough Company: Creating a Business That Works for You, by Adelaide Lancaster & Amy Abrams, Penguin Group, 2011. www.ingoodcompany.com.

I am fascinated with the message in this brand new book – to build your own company to a size that fits you. Sounds simple but with the uptake in our economy there is a great deal of pressure to expand continuously: to strive for more influence & power with the final goal of steadily increasing profitability.

But what gets lost when we embrace that kind of thinking? Lancaster and Abrams challenge you as an entrepreneur to buck popular “wisdom” and peer pressure to create a business that genuinely fits your needs at this time in your life. Pick it up if you are either starting your own business or have been in business for years as I have been. A new and powerful perspective!

Is Your Business in a “Mid-Life” Phase?

Wow, it’s hard to believe that my coaching & training business is over ten years old. It’s been very successful and everything I’ve wanted –from the scope, variety and depth of services, to an extensive involvement in my professional community & networks. And the icing on the cake is having the same wonderful office down here by the Truckee River in an old red brick home converted to offices.

And it’s been a conscious choice to build and develop my business to be just the right size and shape for what I want at this time in my life. I can do – and have done – anything I want. I’ve had the opportunity to “throw spaghetti” on the wall whenever I get “yet another” creative idea. I throw it out – give it a whirl – and see what happens. While maintaining the integrity of my business, I’ve learned that in this economy we all need to be willing to take the risks, push the comfort zones and continually create the business that we really want for ourselves.

But now that my business is in its mid-life . . . what do I want now for my business? Certainly, to continue to be part of people’s lives as they move through significant career and life transitions. That’s been the theme of my life’s work and I love it. But I would also like to change it up a bit and hopefully, that will be more overseas work.

Let’s see what ideas and “spaghetti” I bring back from the sun and waters of Greece!