The Pony Express – Riding as One 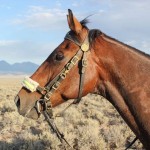 They ride as one. Horse and rider committed to the speedy and safe delivery of the U.S mail working in harmony each doing what they do best.

Here’s what we can learn from watching this amazing teamwork. When we have a burning passion and an unflinching commitment to accomplish something beyond ourselves we must ride as one unit.  We can’t do it alone. Together we are strong and resilient.  And the Pony Express annual Re-Ride demonstrates exactly that.

Watching the 2012 Pony Express Re-Ride come through Northern Nevada in June was an incredible experience.  I had never seen it personally so when our Beer Club friend, Petra Keller, invited us to come watch her ride a portion of this famous trail I had to push the “yes” button.

And it gave me goose bumps to watch these beautiful and hardy horses carry their dedicated riders (from teens to80 years old) across miles and miles of Nevada desert. Each rider and horse takes a segment of the route which began this year in Sacramento on Wednesday, June 13th and ended in Saint Joseph, Missouri on Saturday, June 23rd.  They travel over the original Pony Express route (1966 miles) going through eight states.  600 volunteers coordinate the logistics and support for the horses and riders including the setup of an impressive communications system.

And where’s the mail?  That was interesting . . . the horse carries a 100 lb. leather mail bag called a “mochila”. The mochila has 4 compartments and lifts up and over the saddle to be as balanced as possible.  Transferring it from one horse to the next is much like watching the Olympic Torch being handed off from runner to runner.  But it’s even better because you are watching two horses and two riders working closely together to help each other accomplish this tricky but quick and efficient transfer.

So think about this . . . if there is something really important to you that you are passionate about accomplishing resist the temptation to be the Lone Ranger.  Instead, look for a solid team mate that will put in the hard work, the long miles and the serious sweat to deliver the goal.  Or in the case of the Pony Express to deliver the mail!

Weathering the Storm in an Outhouse

Now this was a stroke of genius or maybe it was pure survival. I loved this story but more importantly the lesson it gives us on how to survive the many storms in our lives.  My take-away . . . we definitely need to practice more “out-of-the-box” or in this case “in the outhouse” thinking!

In June 2012,  41 young college ROTC cadets on a training exercise are caught in a torrential rain storm in the woods of Fort Lewis, WA.  The storm had come on so fast and so strong that the cadets didn’t have their wet weather gear with them or even where they could get back to their packs. The cadets were quickly soaked to the bone and freezing with the nighttime temperatures dropping to 15 degrees.

To try and get some kind of protection, they first formed tight circles with the smallest cadets in the middle.  My niece, Meghan, at 103 lbs, was encircled but the rain and cold was too much.  There was no shelter . . . except for a bunch of outhouses in a row in among the trees.  And then someone had an idea . . .

So with a quick count-off, the cadets divided themselves up into groups of four and into the outhouses they went.  Ten outhouses x 4 = 40 cadets in from the storm.  But what happened to the 41st cadet?  One of those outhouses must have been really stuffed.  In a quick phone call, I asked Meghan how did all those big guys fit in those very small outhouses?  No time to be fussy . . . two stood on the bench and two on either side of the toilet. And that 41st cadet probably had to straddle the toilet seat. Not a pretty sight or smell.

But when the rain had slowed, all ten outhouse doors popped open at the same time and the young ROTC cadets marched smartly out in formation having weathered this storm in a most unique way.  Of course, hopefully they marched straight back to their barracks for hot showers.

Still exhausted from 17 days out in the field and an immediate turn around to her next assignment in Korea, Meghan wasn’t seeing the humor in this experience.  But she will when she gets home and drys out from the typhoon coming through Fort Casey (NW South Korea) as I write this.  Home is going to look really good to her.

And our hats off to our young military volunteers for their service, commitment and good sense when weathering the many storms in our lives.  Thank you for all that you do!

Never Apply for a Job Again

Never Apply for a Job Again: Break the Rules, Cut the Line, Beat the Rest, by Darrell W. Gurney, 2012.

This brand new book reintroduces many of the time-tested job strategies that actually work! But author Gurney puts a different spin on it by recommending that we all approach job searching (even when we’re still employed) as a research project.

And as you are researching targeted work that you genuinely enjoy, you are building powerful personal relationships. That’s what makes it possible to never cold call or pound the pavement again looking for a job but rather be in that enviable position of saying that job just “fell into my lap”.

Use Mind-Mapping to Jog Your Memory

After years of working and living, each of us is in numerous personal and professional networks – some that come to mind quickly and others we may have forgotten about. But how do we remember these connections?

Try using a mind map picture. It’s easy. Start with a blank piece of white paper. Draw a small circle in the middle—that’s you—and now draw several lines shooting off from the central circle. Put circles at the end of those lines. Name those circles for the networks that come easily to mind.

For example, I started with simple networks (often geographic areas) such as: Reno Work; Military Life; Norway; Virginia; San Diego; Kids’ School etc. Next, I chunked those larger networks down starting with my current work which I broke down to colleagues, favorite companies, professional development, etc.

Mind mapping is a way to jog your memory. I’m starting to remember all sorts of folks that I would enjoy reaching out to. With today’s technology—especially Facebook & LinkedIn— that’s not hard to do. I’m going to start with just a handful of favorite “old” friends and see where those lines take me. I’ll let you know what happens and please tell me how it is working for you as well.

It’s an early, early Southwest morning flight from Reno, NV to the East Coast but it is one that I do many times a year now that daughter, Barbara and son, Davis, go to college out in New York and my twin sister, Diane, lives in Boston.

But I really should learn not to go in the middle of a hot, humid summer.  It’s always an “historic” heat wave exactly when I’m due to arrive.  And during the winter, it’s always the “worst storm in the century”.  But plans are plans.  So yes, I’ll be on those planes, trains and in lots of yellow cabs this July 4th holiday week.

I will be thinking of you all as I’m doing laps around Times Square searching for an air conditioned coffee shop or a cool, dark bar for a frosty beer. Can I sneak an underage daughter in?  You bet, if I’m desperate enough!  But I can tell you that I’ll be avoiding the subway system (despite daughter’s protests) because I always seem to get in the one that gets stuck underground.  Those yellow cabs are worth every penny in my humble, older and wiser opinion.

Power outrages?  Stuck in an elevator?  I better avoid those too. I’m a bit claustrophobic which I blame on my twin sister, Diane, who is 100x worse than me.  Now that’s not a pretty sight . . . two twins stuck on an elevator in downtown New York City during a heat wave.  I actually would feel sorry for anyone stuck with us.  First, we would chat them up until their eyes glazed over.  Since both of us are social workers and psychotherapists we can find lots to talk about in someone’s family history – whether they want to or not.

Then we would move on to solving the world’s problems which could keep us entertained for hours.  We could also try and learn how to work our fancy IPhones since we would have lots of uninterrupted time.  I don’t know if cell phones work in a NYC long, tall elevator or not.  But if they do, we could work our way down our contact lists just calling to say hello to all our old friends who are not stuck in an elevator.  By the time we’re done with all that, the NYC fire department would be a very welcome sight . . .  for both us and our fellow elevator hostages.

So off to pack up those bags for another East Coast adventure.  Have a wonderful festive July 4th holiday week.  Just don’t get on those subways or elevators – stick to the yellow cabs!